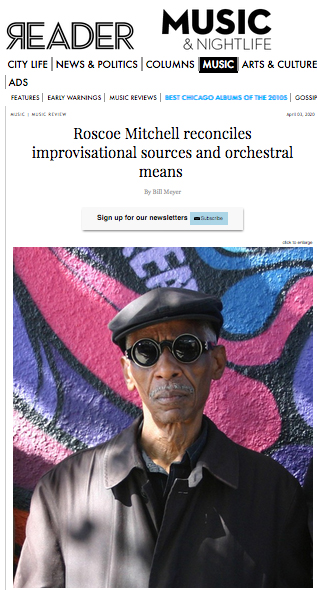 When the Art Ensemble of Chicago reinvented itself as an orchestra for its 50th-anniversary recording, last year’s We Are on the Edge, the idea didn’t come out of thin air. It reflected a use of the classical methods and sounds that the ensemble’s lone surviving founder, woodwind and percussion player Roscoe Mitchell, has been pursuing in his own work since the 1980s. The new album Distant Radio Transmission consists of four completely notated works, three of which are derived from Mitchell’s improvisational practice. “Distant Radio Transmission” began life as a free improvisation by Mitchell, keyboardist Craig Taborn, and percussionist Kikanju Baku, and was subsequently transcribed and rearranged for orchestra. As performed by 31-piece Czech ensemble Ostravská Banda (joined by Mitchell’s trio), the piece has been expanded from a series of telegraphic exchanges of sonic information into a progression of rich textures charged by interjections from Mitchell’s stabbing sopranino saxophone and the absurdist syllable salad of vocalist Thomas Buckner. Mitchell doesn’t play on the rest of the record. “Nonaah Trio” and “Cutouts for Woodwind Quintet” transform material Mitchell first developed in the 1970s and 1980s into sharp-angled, cubist chamber music, while “8.8.88” is a dizzyingly complex work for Disklavier, a sort of computer-operated player piano.