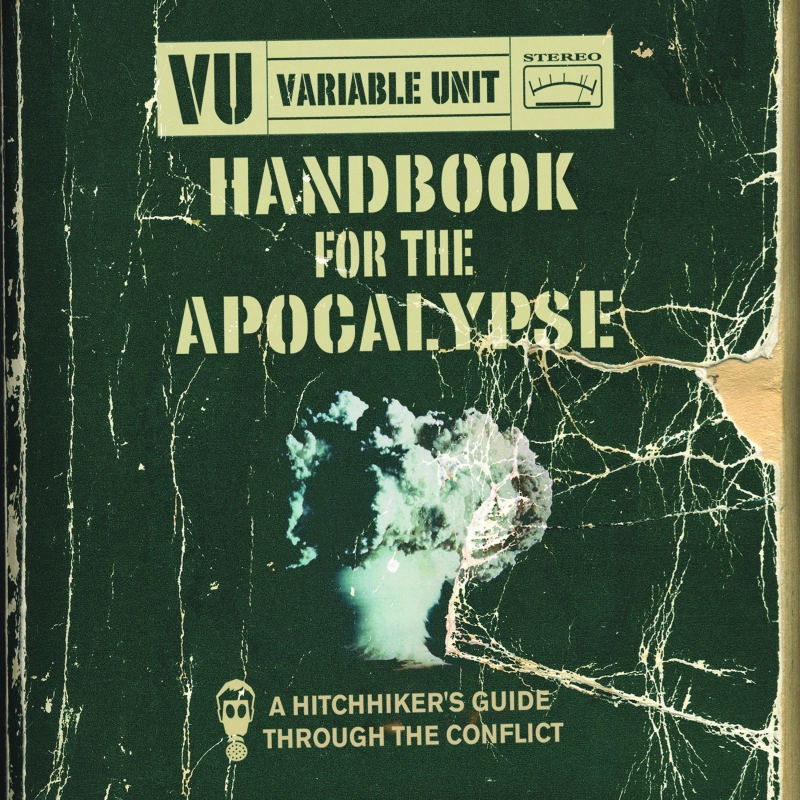 Handbook For The Apocalypse

A voice of freedom and the most conscientious album of the year. – Straight No Chaser

Handbook is a powerful throwback to an era when rap and spoken word mattered and when voices refused to be silenced or censored. – XLR8R

After the success of VU’s debut album Seven Grain, they return with several new recruits, new music, and a new concept; Handbook for the Apocalypse: A Hitchhiker’s Guide Through the Conflict. The current state of the world is unsettling, confusing, and scary. Are we on the brink of World War III? How will we equip and handle ourselves during a time of crisis? The answers lie within your hands. Please open your Handbook for the Apocalypse, place it in your CD player and listen to music that can guide you through these times.

Handbook for the Apocalypse takes you into the trenches with thirteen diverse tracks that can only be described as politically charged organic hip-hop. From the opening drum march featuring wisdom by William Burroughs, Towers Open Fire sets you up for the first musical battle on this album. Following right behind is the lead single “Handbook for the Apocalypse” that showcases Command Surgeon Azeem’s lyrical artillery. Socially consciousness poetry is showcased by Youth Speaks poets’ Paul S. Flores on his piece “I am on a Journey to my Soul, but the Police Just Pulled Me Over,” and on “Walking with my Son” featuring Marc Bamuthi Joseph. From the spiritual tones of Shake the Cosmic Dice” and “Beyond Babylon to the humorous skit of Hologram Network,”VU truly taps into our emotions, artistically expressing what many of us are afraid to say, but feel during this time of conflict.

The V.U. platoon on Handbook for the Apocalypse consists of the following original members: Chief of Espionage Kat Ouano (of Crown City Rockers) on the Rhodes, who threads her signature melodic tones throughout the music. Demolition Expert Matt Montgomery delivers his versatile bass lines and bowing that drive each song. Minister of Propaganda Gregory Howevhandles guitar along with Calvin Keys and sonic archeology, that are expressed on standout tracks like Transcending Terror, using Howard Zinn as the voice of reason. Command Surgeon Major Azeem, once again blesses the mic and delivers us powerful, thought provoking lyrics and comic relief.

Handbook for the Apocalypse also introduces a new draft of soldiers to the unit. Three Star General Thomas McCree supplies the infectious drum rhythms that lay down the foundation and backbone to the album. Organ Lieutenant Jacob Aginsky (of Subnautic) handles the other half of melodies on the B3 keys. Colonel Ralph Carney, best known for his work with Tom Waits adds his eclectic sax playing to the album. Chief Warrant Officer Kevin Neuhoff contributes the apocalyptic chaos with his timpani and gong performance. Corporal E4 Tim Hyland, a regular Wide Hive contributor, adds his raspy and soulful flute touches. Samples, cuts, and scratches were done by Sensei Quest of Live Human and Space Travelers acclaim. Rounding off the new talent is Audio Angel, who is well known for layering beautiful vocals over the local DJ’s in the Bay Area drum and bass scene.

As recently seen in the peace marches in San Francisco and Washington D.C, people in our country are truly taking a stand against our government and most of all war. V.U.s Handbook for the Apocalypse is the perfect musical supplement and soundtrack to support peace, compassion, and unity. Take a listen and take a stand!

1. Forward: Towers Open Fire
2. Introduction: Handbook for the Apocalypse
3. Chapter One: War Again
4. Chapter Two: Not One of Us, All of Us!
5. Chapter Three: I Am on a Journey to My Soul, But the Police Just ...
6. Chaper Four: We Are at War
7. Chapter Five: Hologram Network
8. Chapter Six: Shake the Cosmic Dice
9. Chapter Seven: Gas and Violence
10. Chapter Eight: Walking With My Son
11. Conclusion: Transcending Terror
12. References: Killing Time
13. Index: Beyond Babylon